We mourn the death of the NKST’s Othniel Akume 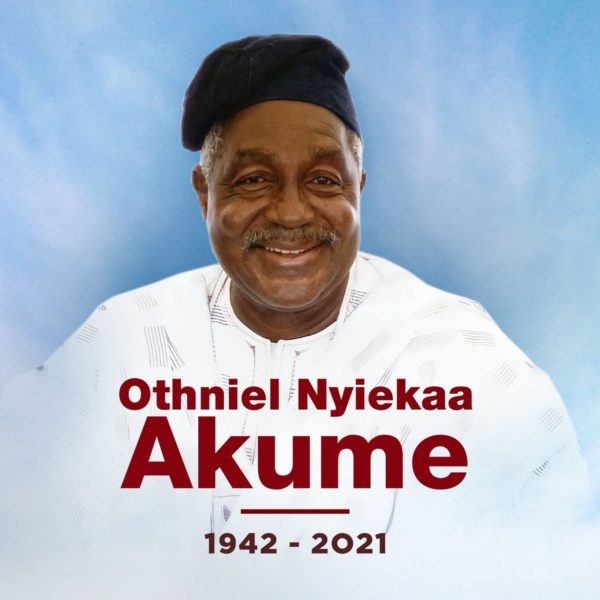 Yesterday, close to 10 pm I received the sad news from my brother, Dooyum Akume, of the passing of our father, Othniel Akume, (5 August 1942 – 16 January 2021) at age 78. He was otherwise in good health until yesterday, when he wasn’t feeling that strong and taken to the hospital. The medics found nothing strange or disturbing about his health, rather were encouraged by its improvement, but alas it ended this way. I’m saddened and distraught but grateful for his life well lived.

He taught in many places including Benue Provincial School (now Government College) Katsina-Ala; Government College, Keffi; ABU Zaria; University of Jos; and so on. Upon graduation at ABU Zaria in June 1969 he immediately joined the Fellowship of Christian Students (FCS) as travelling secretary working as a missionary for free (gift allowance) which was rather revolutionary at the time. Thus began the life of sacrifice, along with our mother, Sue Akume, that I have known all my life, and heard numerous stories about.

As FCS travelling secretary, he traversed the entire northern Nigeria covering all the secondary schools in that part of the country that then were there. Chances are that virtually every pupil who came in contact with Christ especially between 1969 and 1975 (and beyond) did so through the ministry of FCS, and his role of FCS travelling secretary had a role, as many testify to this day.

From 1975 to 1982 he taught, was vice principal, and principal of misson schools: NKST Secondary School, Zaki-Biam and WM Bristow Secondary School, Gboko. Then worked as an administrator in various capacities including registrar, College of Education, Katsina-Ala; to director, inspectorate services, where he personally inspected (along with his team) all secondary schools in Benue numbering 200 or so; director, exams and admissions, where he computerised the system of grading common entrance and junior secondary school exams (in the early 90s) and also facilitated the creation of the Benue State Examinations Board; till he retired in 1998 as executive secretary, Adult and Non-Formal Education Agency.

He served on numerous boards and councils from the National Teachers’ Institute (NTI) Kaduna, to the West Africa Examinations Council (WAEC); secretary, Committee for the Establishment of Benue State University; and presently, Benue State Judicial Service Commission, among several others.

He served his church denomination, the Universal Reformed Christian Church (URCC or NKST) in various capacities from being an elder in the local assembly, to being chair of the Synod’s Committee on Conditions of Service (for over a decade); vice chair, board of governors of the Reformed Theological Seminary, Mkar; administrator, Mkar Christian Hospital; etc. He was secretary, Reform Implementation Committee, Christian Health Association of Nigeria (CHAN); FCS president; secretary, board of trustees; life member, Bible Society of Nigeria; etc.

He was also instrumental in the production of the Jesus Film in Tiv, which is responsible for the conversion of hundreds of thousands of Tiv-speaking peoples to Christ, and also national coordinator, NKST Mission Retreat.

He was the first born of Chief David Akume Ugba (Tor Logo I) and his first wife, Aver Akume, in his father’s large family of 10 wives and many children. He was head of the extremely large extended Ugba family. As a community leader, he was chair, Ugondo Community Bank, Ugba; proprietor, Ugondo Model School, Ugba; Ugondo Development Association (UDA); etc.

It’s sad that I’m referring to him in the past tense, sadly that is the reality now. He was not only a father figure but father indeed to many. He tried to be fair, just, and honest to all, and all his dealings. He had an aversion for injustice and taking advantage the weak and disadvantaged. He had a zero tolerance for mediocrity and excuses. He was a unifier and consensus builder. He was an ideas man and reformer. I can personally testify of numerous reforms he championed every single place he was, and dare say, was almost always handed over dead non-functional bodies to run which he revived and reformed without exception. He was many things to many people, and will be sorely missed.

In the announcement released earlier today by my uncle, his brother, John Morga Tor-Akume, final internment details are yet to be firmed up. They shall be announced in due course.

May his memory be a blessing.